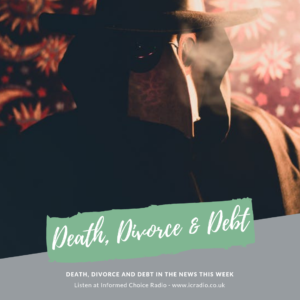 Death, divorce and debt have been in the news a lot this week. Not the most cheerful subjects as we get back into the swing of things in the New Year, but all three important from a financial planning perspective.

So coming up in this episode, why more people die in the second week of January than during any other week of the year, why this week saw the biggest number of divorce enquiries for family lawyers, and why debt is spiraling out of control in the UK. And of course what to do about all three issues from a personal finance perspective.

We’ve also got a roundup of the latest personal finance news – everything you need to know this week in less than five minutes – and there’s the aftershow segment, with a peek into the world of Informed Choice, and my world, over the past seven days.

-The Financial Conduct Authority is introducing new rules designed to reduce costs for thousands of so-called mortgage prisoners. Around 140,000 homeowners are trapped in expensive mortgage deals with unregulated and inactive lenders.

-The British High Street has recorded its worst Christmas trading period in a decade. Retail sales were flat in December, according to new figures from the British Retail Consortium.

-Annual household bills have risen by over £550 in the past three years. That’s according to new findings from comparethemarket.com, with bills increasing three and a half times faster than price inflation over the same period.

-A Freedom of Information request made by financial advice firm NFU Mutual shows the average Child Benefit Tax Charge was £1,220 in the first four full tax years since its introduction in 2013. The Tax Charge recoups some or all Child Benefit payments from households where the highest earner has income over £50,000.

-Amazon CEO Jeff Bezos and his wife, MacKenzie, are set to divorce following a a 25-year marriage. The divorce was announced in a joint statement on Twitter earlier this week. The couple said in their statement, “After a long period of loving exploration and trial separation, we have decided to divorce and continue our shared lives as friends.”

Question of the week

For our Friday episode last week, we would love to hear from you with your answer to this question – How can you make sure that advice is unbiased?

Visit icradio.co.uk/question to find out how to submit your answer. 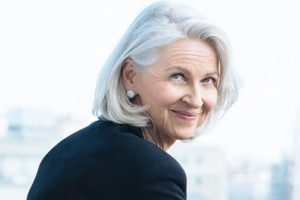 My guest on the podcast today is Diana Chambers. Known[...]

How would you spend your Freedom Dividend?

Universal Basic Income. If you’ve not come across the term[...] 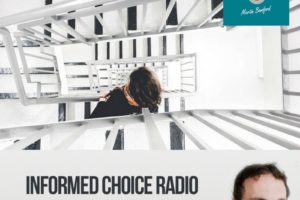 ICR 131: Why are they reducing my State Pension?

In this episode of Informed Choice Radio, Martin explains why[...]