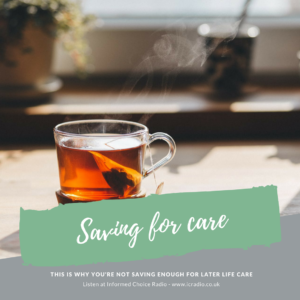 In this episode, why you’re not saving enough for your care in later life and why a proposed care ISA is a really bad idea.

There’s also a roundup of the latest personal finance news and the aftershow segment.

-Households in the UK owe nearly £19bn in unpaid essential bills, including council tax and utility bills. A new report by Citizens Advice has also repeated a warning about the scale of bailiff-related problems, occuring once every three minutes.

-The latest Lloyds Bank Quarterly Savings Report shows the overlap between savvy saving and personal wellbeing, with regular savers feeling happier and less anxious than their non-saving counterparts. Almost half of people say that money matters are their biggest cause of stress.

Have you thought about the cost of later life care?

For the past couple of years I’ve been an Accredited Later Life Adviser, as a full member of the Society of Later Life Advisers. It’s an accreditation and advice area I believe is of growing importance, with our ageing population and more people needing residential care in later life.

When people go into care later in life, it tends to be incredibly expensive. Think of it like staying in an expensive 5 star hotel, every night for several years. Depending on the part of the country where you need care – and down here in Surrey, it’s even more expensive than in other parts of the Uk, with the exception of London – you’re looking at upwards of £1,000 a week.

And if you’ve got any of your own money, you’re usually the one footing the bill.

There’s means tested local authority funded care if you’ve got eligible assets under £23,250; it’s fair to say that most of the people who come to me for advice on care fees planning have to pay their own care.

In the rare circumstances where you’ve got enough money to pay but the local authority are prepared to foot the bill, you probably want to pay for it yourself anyway, as that means you can guarantee a better quality of care home; I’ve visited a few local authority care homes before and, given the choice, I wouldn’t want my parents living there.

So being able to pay for our care is really important. But according to some new research, most of us are failing to save enough to pay for later life care costs. This is despite one in 10 people facing care costs exceeding £100,000 during their lifetimes.

The research from consumer group Which? found that most over 55s don’t know where to look for information about care costs.

–Which? People can’t be expected to make plans for care in later life

–Informed Choice Radio is a finalist for the SHOMOS 2018

–The new book from Pete Matthew, The Meaningful Money Handbook 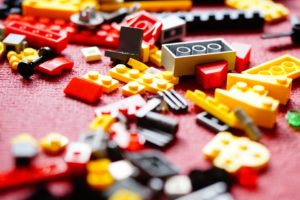 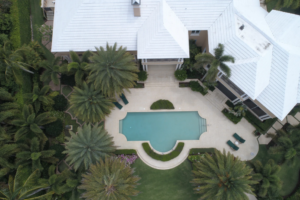 Gain Big & Give Back, with Patrick Rush

What does it take to live with purpose and retire[...] 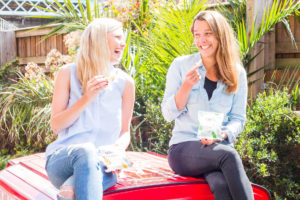 In this episode of the podcast, I’m talking about Enterprise[...]