Are you paying too little tax? 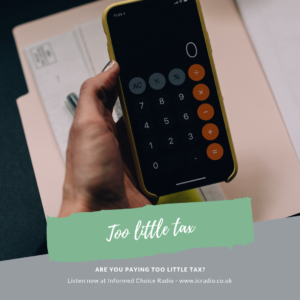 In the world of Financial Planning, the goal when it comes to tax is to pay as little as necessary.

This approach is legal tax avoidance, rather than illegal tax evasion, and it involves making use of available allowances and reliefs to manage your tax affairs most efficiently.

But what happens when you pay too little tax?

According to some new research, around a third of taxpayers who use self-assessment could be paying too little.

In this episode, Martin talks about the scale of the issue and shares some tips for dealing with tax underpayments.

-Financial Conduct Authority CEO Andrew Bailey has added to calls for Neil Woodford to waive investor charges in his suspended fund. Bailey said Woodford should “consider his position” about the management fees, which are reported to be around £100,000 a day. Investors have been unable to trade in the Woodford Equity Income fund since trading was suspended last Monday evening. Speaking to BBC Radio 4’s Today programme, Mr Bailey said of Neil Woodford, “we need him to manage these assets now more than ever. His job now is to get this fund back into a position where there can be orderly trading, so he has his work cut out now.”

-Almost two in three homebuyers who made use of the Help to Buy scheme were in a financial position to buy their own home without the government assistance. According to a report from the National Audit Office, many of those homebuyers would not however have been able to buy the home they wanted, without help from the scheme. The report also found that one in 25 of those who took advantage of Help to Buy had household incomes over £100,000. According to the NAO, the Help to Buy scheme helped to boost the profits of house builders.

“However, a proportion of participants could have afforded to buy a home without the government’s help.

“The scheme has also exposed the government to significant market risk if property values fall, as well as tying up a significant public financial capacity.

“The government’s greatest challenge now is to wean the property market off the scheme with as little impact as possible on its ambition of creating 300,000 homes a year by 2021.”

-Arcadia Group, which includes the brands Topshop, Dorothy Perkins and Burton, has survived voting in a series of Company Voluntary Arrangements. Arcadia has more than 500 retail locations and is one of the last big British retailers to hold a controversial CVA in order to shut down underperforming stores, and lower rents to landlords in others. The votes mean Arcadia’s landlords have agreed to cut rents or revise lease terms at close to 200 locations. Their biggest landlord, Intu Properties Plc, voted against the restructuring.

Following the voting drama, Arcadia boss Sir Philip Green said: “Our team did an amazing job working 24/7 and the supply chain and our direct suppliers were amazingly supportive. Nobody faltered. They were fantastically supportive.

“We are in 32 countries. Our supply chain goes all over the world and the knock on damage if this had not gone through would have been ginormous.

“It is good to know there is still support out there for the business, for my family and for me. There is no way in the world that I wanted it to end up in a catastrophe.

“From a personal point of view, even if you score in the 95th minute. A win is still a win.”

-Employees in the UK have experienced an unbroken period of real-terms wage growth since last February, according to the latest official figures. It means real total growth of 1.2% in the past twelve months. The ONS also reported that private sector employment continues to grow, with the total employed rising by 287,000 in the last year. Jobs requiring more qualifications, particularly in sectors like technology and science, continued to show the biggest increase. Higher skilled roles made up around 75% of the rise in employment since 2010 – employing an extra 2.6 million people since 2010.

“Once again we see more people in work than ever before; 3.7 million more since 2010. A testament to the government’s support for employers and jobseekers on a day where we also mark that 2 million claimants are now being supported through Universal Credit.

“With wage growth increasing pace on last month, outstripping inflation for the 15th month in a row, and record high female employment – the government’s focus on pro-business policies and balanced economic management is delivering opportunity for all.

“As we celebrate the UK’s powerhouse digital sector in London Tech Week, we also see almost 100,000 more people in digital jobs in the last year alone.”

-Over 50s are increasingly financing not just one, but two generations; boosting spending money, gifting lump sums, or providing childcare – totalling £53bn per year. New research from Saga has revealed that 69% of over 50s provide financial support to their children and 57% to their grandchildren. In fact, four in ten (42%) are providing financial support to both generations. Nearly a third (31%) of the over 50s have gifted lump sums to their children in the last five years – with an average gift of £13,862 per child and almost a fifth (17%) have given their children additional spending money, on average £1,361 per year.

Jeff Bromage Managing Director, Saga Money commented: “With rising living costs and incomes increasingly squeezed, many grandparents are now being called upon to provide substantial financial support to their wider families. In many cases, in addition to regular cash top-ups, nearly a quarter are providing hands-on support in the form of free childcare.

“As this becomes a growing trend, it is essential that grandparents do not compromise their own finances in order to provide these free handouts. We strongly encourage both parents and grandparents to ensure they are in a viable financial situation to offer this help and are not at risk of subsequently leaving themselves vulnerable.

“However, it’s not all about the financial needs of their family – as many grandparents relish the opportunity to spoil their children and grandchildren – and rightly so. Whilst many have saved hard throughout their lives to ensure they can continue to pursue their passions, many also want to see their families enjoy any financial gifts they can afford to give them. The Bank of Nan and Grandad is often less focussed on the monetary aspect and simply an opportunity for families to spend quality time together – and this is something we hope to see continue.” 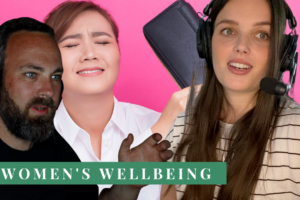 4 in 10 women struggle with their financial wellbeing as[...] 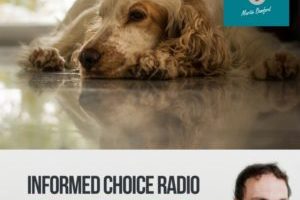 ICR161: How To Make More Money By Doing Less

Today on the podcast, I’m sharing some thoughts on How[...] 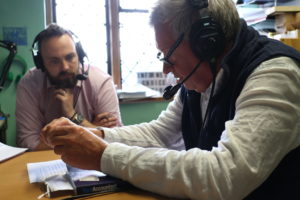 My guest on Informed Choice Radio today is Chris Rowland[...]